Coronavirus In Vacant Apartment In China Suggests Spread Through Toilets

Coronavirus In Vacant Apartment In China Suggests Spread Through Toilets 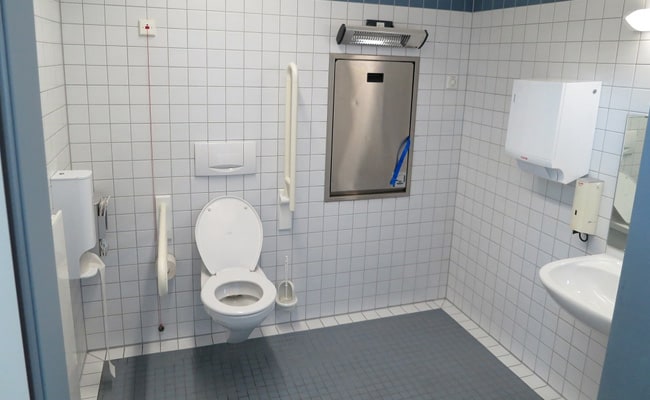 The discovery of coronavirus in the bathroom of an unoccupied apartment in Guangzhou, China, suggests the airborne pathogen may have wafted upwards through drain pipes, an echo of a large SARS outbreak in Hong Kong 17 years ago.

Traces of SARS-CoV-2 were detected in February on the sink, faucet and shower handle of a long-vacant apartment, researchers at the Chinese Center for Disease Control and Prevention said in a study published this month in Environment International. The contaminated bathroom was directly above the home of five people confirmed a week earlier to have Covid-19.

The scientists conducted “an on-site tracer simulation experiment” to see whether the virus could be spread through waste pipes via tiny airborne particles that can be created by the force of a toilet flush. They found such particles, called aerosols, in bathrooms 10 and 12 levels above the Covid-19 cases. Two cases were confirmed on each of those floors in early February, raising concern that SARS-CoV-2-laden particles from stool had drifted into their homes via plumbing.

The new report is reminiscent of a case at Hong Kong’s Amoy Gardens private housing estate almost two decades ago, when 329 residents caught severe acute respiratory syndrome, or SARS, in part because of faulty sewage pipelines. Forty-two residents died, making it the most devastating community outbreak of SARS, which is also caused by a coronavirus.

“Although transmission via the shared elevator cannot be excluded, this event is consistent with the findings of the Amoy Gardens SARS outbreak in Hong Kong in 2003,” Song Tang, a scientist with the China CDC Key Laboratory of Environment and Population Health, and colleagues wrote in the study, which cited unpublished data from the health agency.

Apartments in multistory buildings may be linked via a shared wastewater system, said Lidia Morawska, director of the International Laboratory for Air Quality and Health at Australia’s Queensland University of Technology. While solids and liquids descend the network, sewer gases — often detectable by their odor — sometimes rise through pipes in the absence of sufficient water, said Morawska, who wasn’t part of the research team.

“If there’s smell, it means that somehow air has been transported to where it shouldn’t go,” Morawska said in an interview.

SARS-CoV-2 spreads mainly through respiratory droplets — spatters of saliva or discharge from the nose, according to the World Health Organization. Since the first weeks of the pandemic, however, scientists in China have said infectious SARS-CoV-2 virus in the stool of Covid-19 patients may also play a role in transmission. A February study of 73 patients hospitalized with the coronavirus in Guangdong province found more than half tested positive for the virus in their stool.

How Do People Catch Covid-19? Here’s What Experts Say: QuickTake

Previous research has shown that toilet flushes can generate germ-laden aerosols from the excreta, the China CDC scientists said. Those particles can remain in the air for long periods and be dispersed over distances of more than 1 meter (3 feet), particularly in confined, poorly ventilated spaces.

Fecal aerosolization occurred with SARS, and it’s possible that it may rarely occur with SARS-CoV-2, depending on sewage systems, said Malik Peiris, chair of virology at the University of Hong Kong’s School of Public Health. The China CDC study found traces of virus, “which is not the same thing as infectious virus,” he said. “But one has to keep the possibility in mind.”

In the Amoy Gardens case, warm, moist air from the bathroom of a SARS patient excreting “extremely high concentrations” of virus in feces and urine established a plume in an air shaft that spread the airborne virus to other apartments, research showed.

Although toilets are a daily necessity, they “may promote fecal-derived aerosol transmission if used improperly, particularly in hospitals,” the China CDC researchers said. They cited a fluid-dynamics simulation that showed a “massive upward transport of virus aerosol particles” during flushing, leading to large-scale virus spread indoors.

“The study finds high plausibility for airborne transmission and outlines the evidence in great detail,” said Raina MacIntyre, professor of global biosecurity at the University of New South Wales in Sydney, who was part of an international team invited to collaborate with China CDC on the study.

A shared toilet was implicated in a SARS-CoV-2 infection that likely occurred on an evacuation flight from Milan to South Korea in late March, researchers said in a report in the U.S. Centers for Disease Control and Prevention’s Emerging Infectious Diseases journal.

A 28-year-old woman developed Covid-19 symptoms about a week after the flight, during which she wore an N95 respirator mask, except when she used a toilet. The toilet was shared by other passengers, including one seated three rows away who was infected but had no symptoms. Because of strict infection control procedures implemented immediately before and during the flight, the authors concluded that the most plausible explanation for the infection is that it was acquired via indirect contact with an asymptomatic passenger while using an onboard toilet.

Previous investigations confirmed that SARS-CoV-2 genetic material was found on toilets used by Covid-19 patients, in the air in hospital nurses’ stations, on air outlet vents, and multiple other sites. The extent to which fecal aerosol plumes are infecting people with the SARS-CoV-2 virus isn’t known, said Queensland’s Morawska.

“There are lots of situations where things happen and are pretty unusual,” said Morawska, who was part of a team that studied the Amoy Gardens contagion. Scientists should investigate the “unusual situations” because, by understanding them, they may find “they’re not that unusual.”

Share:
Prev： Coolest products to have in your bathroom » Gadget Flow
Next： Five bathroom updates that will help your space stand the test of time | Lifestyle