News
Home  Blog  A container ship of Evergreen ran aground while passing through the Suez Canal northbound on the 23rd.

A container ship of Evergreen ran aground while passing through the Suez Canal northbound on the 23rd.

Taiwan’s Evergreen Shipping’s ultra-large container ship EVER GIVEN accidentally bottomed and grounded, causing the blockade of the Suez Canal in Egypt, which has attracted global attention. Taiwan’s China Times News reported on March 27 that due to the slow progress of dredging sand, the number of blocked ships has skyrocketed, and the daily loss has exceeded tens of billions of dollars. Some experts analyzed that the 28th to the 29th happened to be the time when the tide was full in the near future, and it might be the best time to rescue the EVER GIVEN. 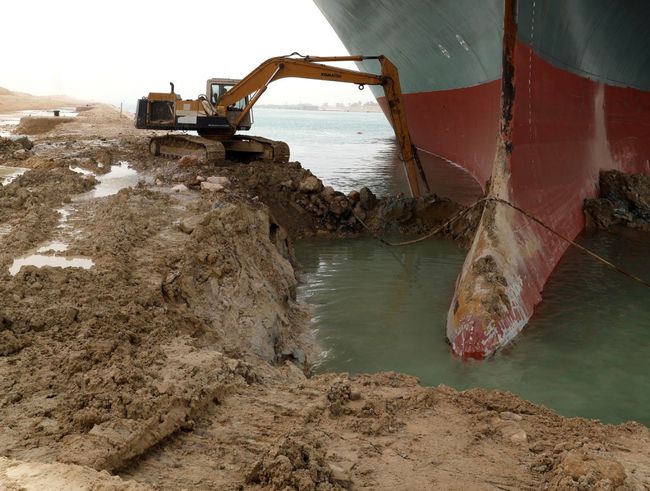 A container ship of Evergreen Shipping ran aground while passing through the Suez Canal northbound on the 23rd.

According to the report, the professional organization affiliated to Lloyd’s List Intelligence assessed on the 26th that before the resumption of navigation, the daily loss was estimated at 9.6 billion U.S. dollars, which is as high as 400 million U.S. dollars per hour, and this figure is the first time to block traffic. Estimated with 165 ships in 2 days. At present, the number of blocked ships in the Suez Canal has rapidly increased from 165 to 209, including 77 bulk carriers, 30 oil tankers and 51 container ships, 22 chemical product ships, and a total of 15 liquefied petroleum gas and natural gas ships. , And 14 ro-ro wheels with a total carrying tonnage of 1699 tons. The cargo includes crude oil, crops, cement and liquefied natural gas, etc. The global trading business has been severely affected and suffered heavy losses. At present, all parties have mobilized a large amount of manpower to help the EVER GIVEN get out of trouble. The Egyptian side said that it may take a few days, which will increase the overall loss by tens of billions of dollars.

China Times News reported that the most common rescue method is to use tidal floatation, but it is currently difficult to carry out because the tide range of the canal is 2 meters, and the bow of the “Changci” is mostly on the shore, which will decrease. Drainage, making it difficult to float.

According to the report, if you want to dismantle nearly ten floors of containers on the deck, generally the barge crane is not high enough, you have to use a special large gondolas and add container spreaders, but this method is not automatic enough, and it takes many days to move the bow of the ship. The container is unloaded. Nowadays, pressure drainage is used to change the attitude of the ship. The bow ballast water has been drained and the stern pressurizes the water. However, because the ship is nearly fully loaded, the adjustable ballast water volume is very small and the stern water depth is also limited. . Therefore, the dredging method is the most reliable, but the dredging operation is slow, which will also delay the blockage time.

U.S. media quoted marine salvage expert Nick Sloane as saying that the best time to help EVER GIVEN out of trouble might have to wait until the high tide period on the 28th or 29th. However, if the congestion cannot be eliminated within a few days and the high tide is used to float the EVER GIVEN, not only will the loss exceed tens of billions of dollars a day, it will also increase due to the increase of blocked ships, and it may also affect the logistics and energy of the world. The impact of the market.

Regarding the cause of the accident, Evergreen Shipping stated that when the EVER GIVEN entered the Suez Canal from the north of the Red Sea on the morning of the 23rd local time, it was hit by a strong wind at 6 nautical miles at the southern end of the estuary, causing the hull to deviate from the course and touched. Bottom stranded. GAC, a maritime service company headquartered in Dubai, UAE, stated that the ship had suffered a “whole ship blackout”, which meant that it had lost power and steering functions before being trapped. The cause of the accident is not yet known. However, a spokesperson for the Suez Canal Authority revealed that a sandstorm obscured the captain’s view, and strong winds simultaneously blew the ship away from the channel, and then stranded and lost power.

An unnamed shipping lawyer said, “This may be the world’s largest container ship disaster without ship collisions.” The Suez Canal is an important channel for energy transportation, and Middle Eastern oil is transported to Europe, the United States, Russia and the United States through this waterway. North Sea oil is transported to Asia through this. In addition, about 8% of the world’s natural gas is also transported by the canal. “China Times” said on the 25th that this world’s one of the most busy trade and traffic routes has been paralyzed, and the worry of crude oil shortage has caused oil prices to rise by 2%; if the situation of the congestion vessel cannot be alleviated, it may disrupt the global energy supply chain and affect international oil prices. And global logistics.

At the same time, the sky-high compensation has attracted much attention from the island. According to Reuters, even if the “Changci” is quickly out of trouble, as one of the world’s largest container ships, its owner and insurer may face millions of dollars for the large amount of cargo on board, the excavation costs of the rescue process, and pollution costs. The claim for compensation also made this case the largest compensation case in the global freight forwarding industry.

The British Mutual Insurance Association, which is responsible for Evergreen Insurance’s compensation, refused to respond to the specific content and amount of compensation, only stating that Evergreen’s insurance covers pollution and injury compensation. On the 25th, Zhang Yanyi, chairman of Evergreen Shipping, replied in writing to Taiwan’s “Ministry of Transportation” stating that the EVER GIVEN is a long-term chartered vessel of the company. Any operational error or force majeure on board that causes damage to the ship is all ships. Dong’s responsibility is also true of this accident.

It is said that the frieght of container sea shipping will increased due to this issue, and it will lead to big delay of other shipment to Mediterranean coast.

Share:
Prev： February National Sales Of Building Materials And Home Furnishing Stores For 45.03 Billion Yuan, Smart Toilets In The Refined Decoration Market In 2020 Supporting The Size Of The Increase Of 61%, The Export Value Of Stone In 2020 Increased By 14.9%
Next： Air and Ocean Freight Delays, Rates & Cost Increases