LIXIL Announces Shutdown Of Material Factories As Epidemic Causes Over 1,100 Businesses To Go Bankrupt In Japan

LIXIL Corporation (“LIXIL Group”) announced on March 19 that it has decided to shut down its aluminum plant in Maebashi, Japan by the end of March 2023 and transfer the processing operations of the plant to LIXIL’s three plants, the Kasukawa Plant (Maebashi, Gunma), the Oyabe Plant (Oyabe, Toyama) and the Shimotsuma Plant (Shimotsuma, Ibaraki), respectively. According to the announcement, the move will allow LIXIL Housing Technology’s aluminum division to optimize its supply capacity to respond to changes in domestic demand in Japan. 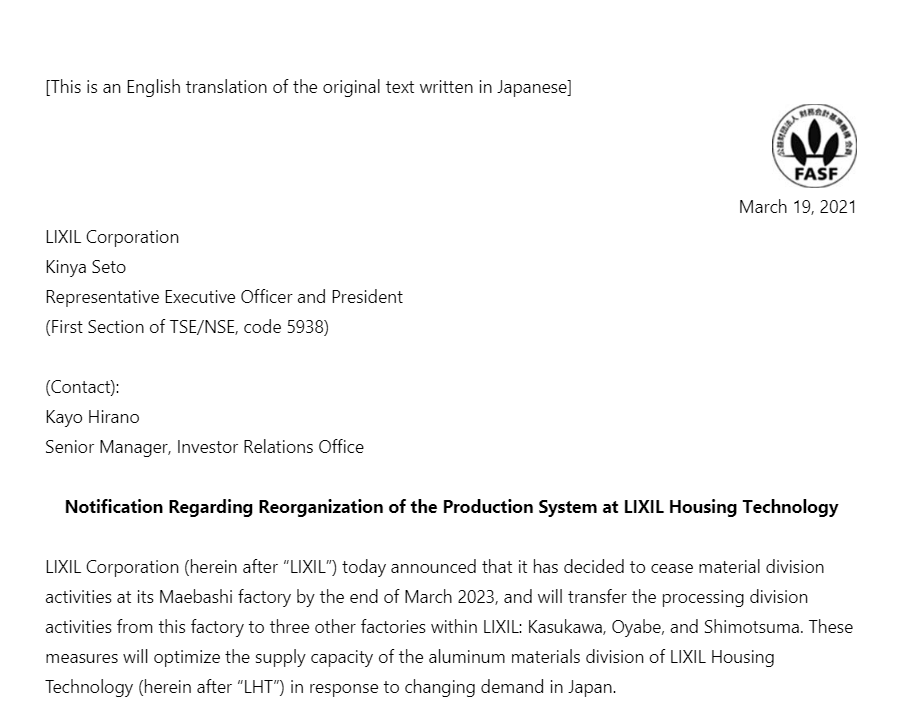 According to the announcement, the plant, which was completed and commissioned in 1965, produces and processes aluminum and employs 729 people (254 full-time employees as of February 2021) on a 165,000-square-meter site. Due to the economic impact of the ongoing epidemic in Japan, from February 2020 to March 2021, a total of more than 1,100 companies in Japan are undergoing bankruptcy procedures due to the epidemic. In the announcement, LIXIL said that with the decline in housing starts in Japan, demand is expected to decrease. For this reason, we are optimizing the supply capacity of our aluminum division and reducing costs by improving utilization rates.

The LIXIL Group began structural reforms in 2018 by divesting non-core businesses, merging the LIXIL Group and LIXIL Corporation, and streamlining its organizational structure. At the end of October 2020, the LIXIL Group launched its “New Life” voluntary retirement program, which will enable 1,200 employees (approximately 8% of total employees) to voluntarily retire as part of a cost reduction program. (Quick link: LIXIL to cut 1,200 old employees as Japanese companies embark on staff restructuring)

On March 22, 2021, the LIXIL Group announced in its Board of Directors renewal plan and new management transition plan that it will nominate eight of the existing nine directors for re-election and two new candidates, which will increase the number of LIXIL directors to 10, seven of whom will be outside directors.

In addition to this, in terms of streamlining the management structure, the senior management team hierarchy has been simplified from three levels to two levels, consisting of a president and two levels (executive vice president and senior vice president) of executives. As part of the reform, 10 new Senior Vice Presidents will also be appointed. Effective April 1, 2021, the total number of executives will be reduced from 50 to 32 (including the 10 newly appointed executives).

Also, effective April 1, 2021, the titles of employees at the manager level and above will be unified and simplified within the company. For executives who hold global positions within LIXIL International and the LIXIL Group, the title will be simplified to “Leader” for their functional area.