According to Vietnamese media reports, the value of Vietnam’s imports of ceramic tiles and bathroom products from China has increased by 60-70% annually. Many local enterprises have reduced their production scale. The Vietnamese authorities have instructed the Ministry of Construction of the country to formulate countermeasures. Vietnam had tightened the import of sanitary ware products made in China last year due to the same problem, but it seems that the effect is not obvious.

Chinese made bathrooms are growing rapidly.

Some Vietnamese companies cut production by 20%

According to a recent report from the Vietnam Youth Daily, a reporter from the newspaper visited furniture stores and retail stores in Hanoi, Ho Chi Minh City and other cities and found that the store sells a large number of ceramic tiles and bathroom products imported from China. brands including Korest, Rangos, Joto, Kobesi , Karassa, etc. 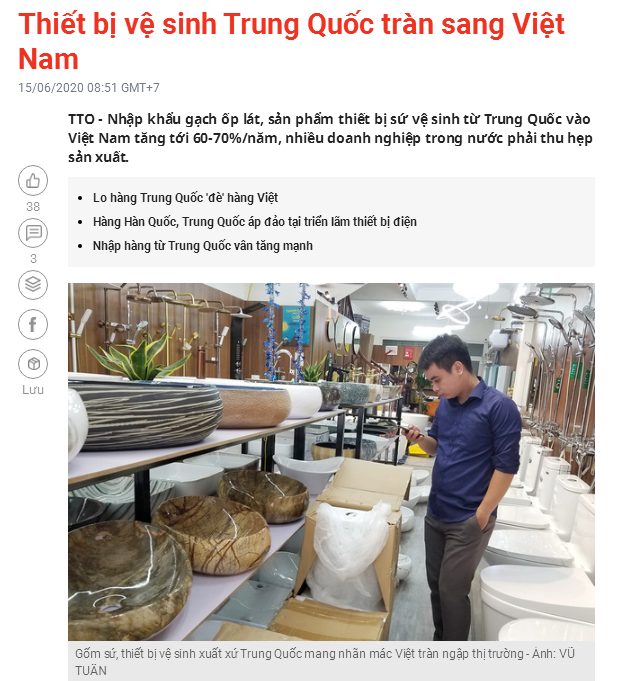 Most of these products are claimed to be produced in accordance with the process standards of South Korea and Japan, but the price is very cheap, such as Chinese-made “combo” bathroom products sold for less than VND 4 million (about RMB 1,200). While the price of similar products to other common brands such as INAX, TOTO, Viglacera, is VND 6-8 million (about RMB 1800-2500).

It is reported that many bathroom brands in Vietnam are imported from China by local distributors and then sold with locally registered trademarks. For example, the staff of a ceramic tile and sanitary products distributor in Hanoi’s Ha Dong County said that all the products sold in the store have the company’s trademark, but all the products are imported from China,” you can understand that it’s a locally produced product in China and we paid for the trademark “.

Pham Van Be, Director of the Department of Materials Construction of the Ministry of Construction of Vietnam , said that in the past few years, Vietnam’s imports of ceramic tiles and sanitary products from China have increased by 60-70% every year. Some local distributors believe that the continuous increase in China’s imports of ceramic tiles and bathroom products is related to the Sino-US trade war. Because the United States raised China’s Tariffs on imported ceramic tiles and bathroom products to 250%, Chinese sanitary enterprises turned to Southeast Asia to export products.

Some Vietnamese companies have had to take the initiative to cut production due to the continuous increase in imports of Chinese tiles and sanitary products. Relevant person in charge of Viglacera Company in Binh Duong, Vietnam said that in the face of pressure from Chinese products, the company has reduced its production capacity by about 20% in 2019. In response to this situation, the Vietnamese authorities are bringing the matter to the attention of the Ministry of Construction of the country, which is currently gathering and proposing measures to address the situation.

Not the first “tightening” of imports of Chinese sanitary products

In fact, Vietnam had taken precautions against imports of sanitary products from China before the threat was reported in Vietnamese media. In October 2019, the Vietnam General Administration of Vietnam Customs issued a document instructing the customs of all provinces and cities to strengthen the inspection of sanitary products, especially those originating in China, and requested all units to strengthen patrol, control and supervision of construction materials at border crossings. The document pointed out that Vietnam Customs has received letters from many enterprises, reflecting that a large number of imported sanitary products, especially those imported from China, have affected the production and business activities of local Vietnamese enterprises. 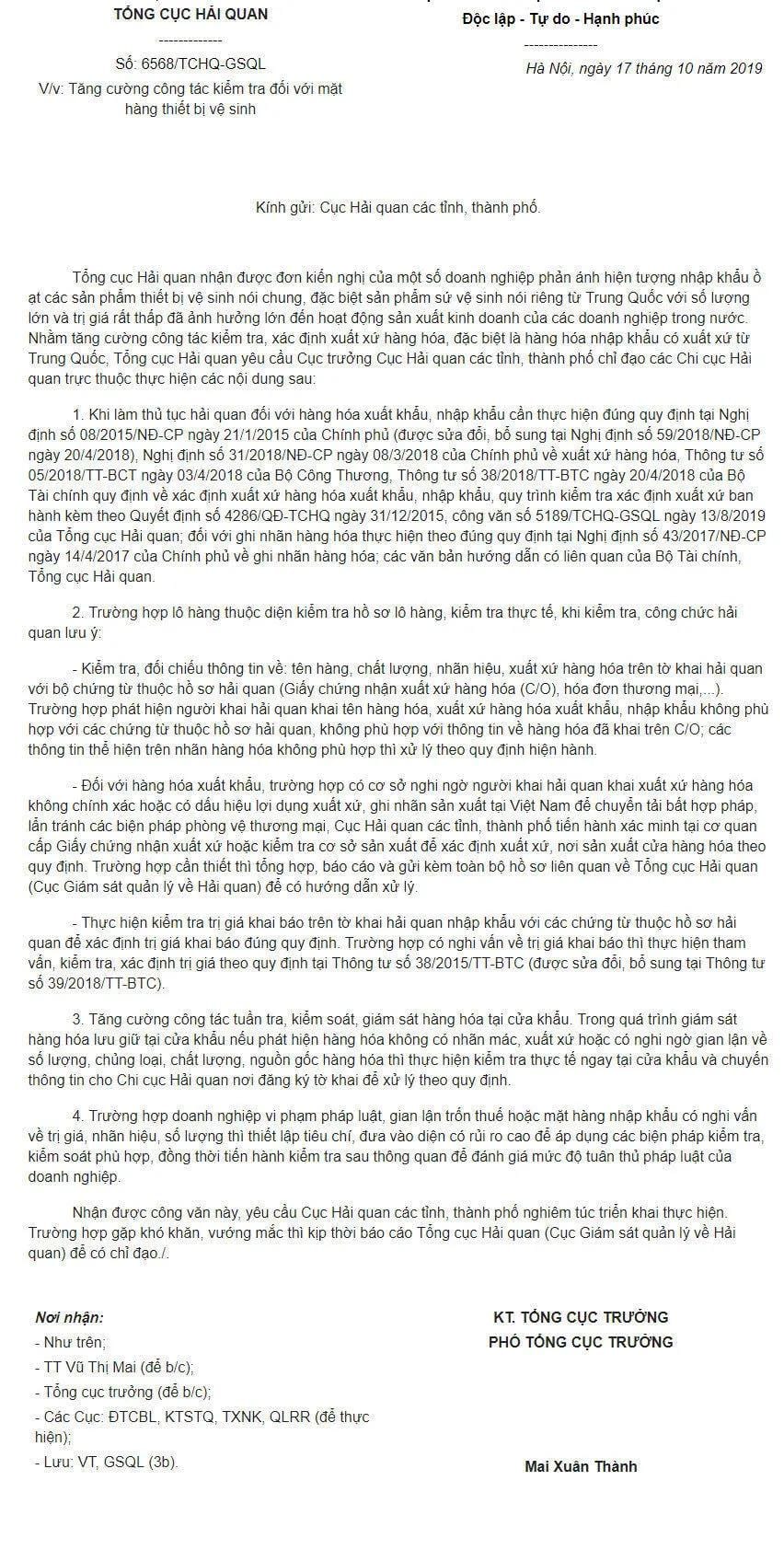 According to statistics from Vietnam Customs, Vietnam imported ceramic tiles worth US$100 million and bathroom products worth US$52 million from China in 2019. However, there may be deviations in this data, as the Vietnam Building Ceramics Association revealed that the value of tile products imported from China in 2019 was 200-$250 million, and bathroom products are valued at $110-$120 million.

Vietnam’s attractiveness to sanitary ware companies is manifested in many aspects. Over the past decade, Vietnam’s GDP has increased by 145.3%. This year, affected by the COVID-19, the GDP growth rate is expected to slow to 2.7%, but this is still likely to be the world’s first growth rate. In addition, Vietnam’s urbanization process is also proceeding at a high speed. According to the authorities, as the population increases, Vietnam must build about 100 million square meters of new housing every month, which is a rare opportunity for the bathroom or other building materials companies.

At present, a large number of domestic sanitary enterprises have set up the Vietnamese market, such as, JOMOO, HUIDA, SEAGULL, CRW, LOTA International, and Primy have business in Vietnam and neighboring countries. There are also many enterprises that enter the Vietnamese market as OEM. For example, as reported in the “Youth Daily”, these companies produce products in China and sell them to Vietnamese distributors who labeled it and sold it in the local market.

According to a report from the Joint Market Research, Vietnam’s bathroom and bathroom accessories market is expected to reach $690 million by 2025. At present, Vietnam has concentrated a number of well-known brands including TOTO, LIXIL, GESSI and CAESAR, and many of them are increasing their market share in the Vietnamese market in recent years. 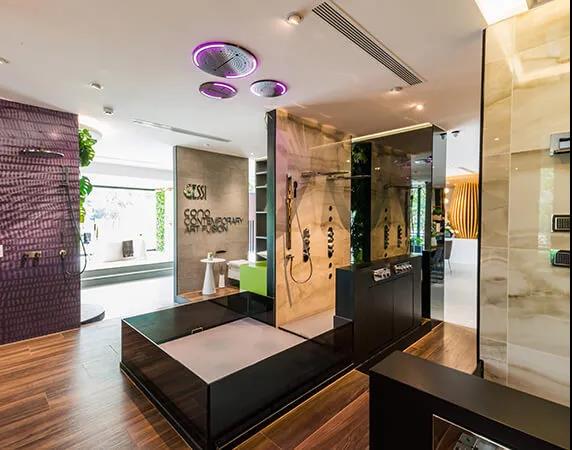 In addition to foreign brands, as the largest producer of ceramic and sanitary ware products in ASEAN countries,, a number of Vietnamese local brands such as Viglacera, Thien Thanh, Hao Canh, JSC Ceravi, etc. also occupy a significant market share, and have gradually penetrated into other ASEAN countries. These local companies compete with companies from China, Japan, Italy and other countries to form the sanitary industry structure in Vietnam and even Southeast Asia. It is believed that as local residents continue to increase demand for mid-to-high-end products, low-end products will continue to decrease and be replaced by high-spec. competitions among international brands.