Recently, a bathroom company in Qingdao was fined 42,500 yuan by the authorities for a certain process in the production workshop was not carried out in a confined space. And in Xiamen production area, a local sanitary ware enterprise was also exposed to a fine of 16,000 yuan for environmental violations. Not only these two enterprises, the first quarter of 2021, but the relevant departments around the country also informed a number of ecological and environmental problems and environmental violations cases, involving Foshan, Qingyuan, Quanzhou and other places of ceramic sanitary ware enterprises, reflecting the industry’s environmental awareness still needs to be improved.

The unit is located at No. 280, Yanqing Level 1 Road, Longquan Street Office, Jimo District, Qingdao City, China to build a whole bathroom production and processing project. At the time of the initial on-site inspection, the moulding workshop was in production, generating VOCs exhaust gas, and the exhaust gas treatment facilities were operating normally, but the workshop door was not closed, resulting in the moulding process not being carried out in an enclosed space, and the unit was ordered to close the workshop door. on January 6, 2021, the workshop door was still not closed when the site was inspected again. 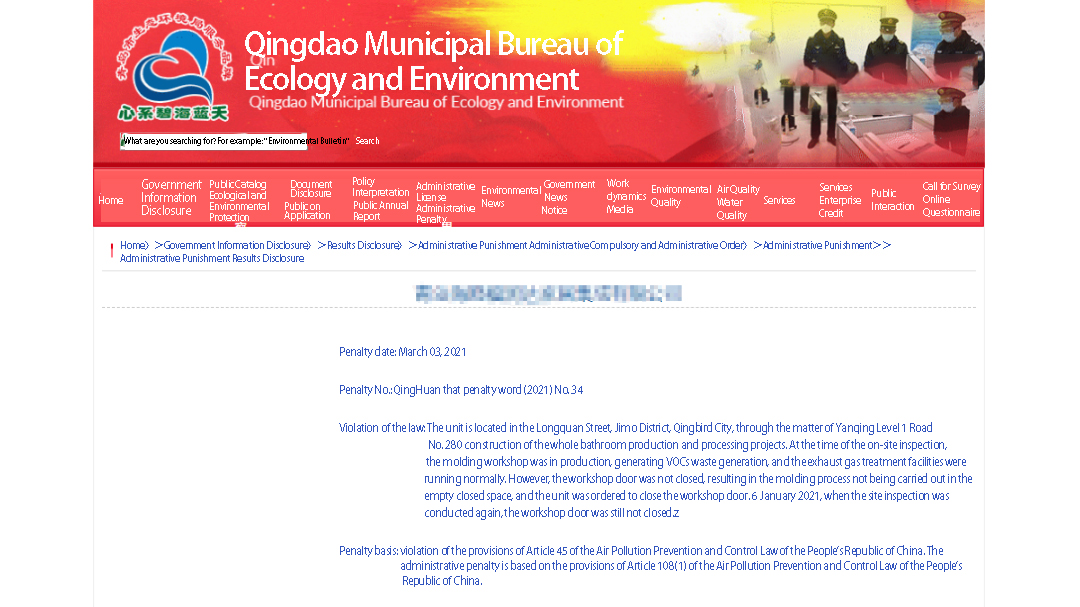 No coincidence, in the important sanitary ware production area of Xiamen, recently there is also a sanitary ware enterprise was fined for environmental violations. March 4, Xiamen Haicang Ecological Environment Bureau website released a decision on administrative penalties involving a sanitary ware enterprise. The decision shows that on January 29, 2021, the provincial inspection team, the city’s ecological and environmental comprehensive law enforcement detachment and the Haicang Ecological and Environmental Comprehensive Law Enforcement Brigade went to the enterprise in question, located on the 1-2 floor of Plant No. 1, No. 169 Xiyuan Road, Xinyang Street, Xiamen, to carry out a joint inspection and found that the unit’s environmental impact report form for the project of 23 new injection molding machines was not reported to the competent ecological and environmental department with approval authority in accordance with the provisions of the State Council Approval was granted, and construction began in November 2020, when six more injection molding machines were being installed. 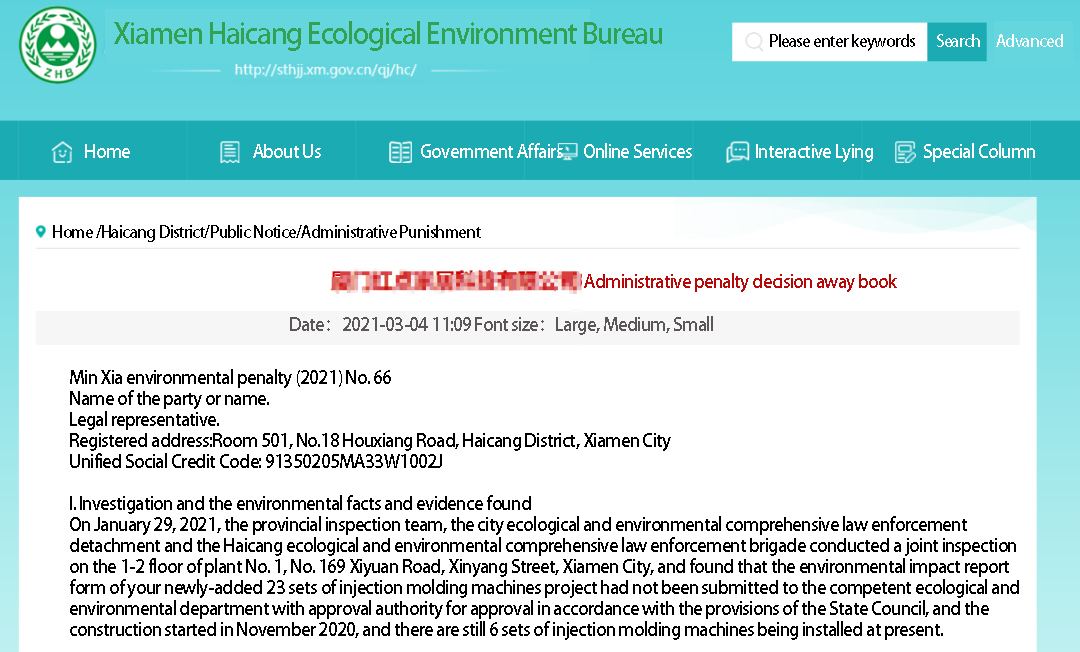 According to the notification, the company’s relevant behavior violated the provisions of Article 22, Paragraph 1 of the Environmental Impact Assessment Law of the People’s Republic of China. Xiamen Haicang Ecological Environment Bureau informed the company of its right to statement and defense with the Administrative Penalty Prior Notice on February 3, 2021, but the company failed to make a statement and defense within the specified time. According to the relevant provisions, Xiamen Haicang Ecological Environment Bureau imposed an administrative penalty of RMB 16,000 yuan on the company.

Since this year, a number of ceramic and sanitary enterprises

Since this year, around the notification of a number of ecological and environmental problems and environmental violations, many of the ceramic sanitary ware enterprises were “named”, the reason involves illegal discharge of pollutants, pollution control facilities are not perfect, failure to implement the shutdown requirements.

Recently, Foshan, Qingyuan 2 pottery enterprises for violation of air pollution control management system, was imposed on the environment administrative penalties. In this case, Foshan City China Ceramic Wanfeng Ceramic Equipment Co., Ltd. was fined 128,000 yuan for failing to install and use pollution prevention and control facilities in accordance with the regulations, and failing to take measures to reduce exhaust gas emissions. Qingyuan City, the new Jinshan Ceramics Co., Ltd. for air pollutant emissions in excess of the standard provisions were fined 430,000 yuan, and ordered to stop the violation.

Earlier, a pottery enterprise in Fujian Province for evading supervision of air pollutant emissions constitute environmental violations B was “named” by the Ministry of Ecology and Environment. According to the announcement, Nan’an City, Hong Kong Sheng Ceramics Co., Ltd. air pollutant emissions data is high. The on-site inspection by the Quanzhou City Environmental Supervision Detachment found that the company’s No. 1 and No. 2 brick presses were both in production. The two brick presses shared a bag type dust removal facility, but the bag type dust removal facility was not opened. The dust from the brick press was not collected and treated according to the requirements of the record approval, and was directly discharged. In this regard, Quanzhou Ecological Environment Bureau penalized the party concerned with a fine of 200,000 yuan. It also ordered the correction of the violation and transferred to the Public Security Bureau of Nan’an City for investigation in accordance with the relevant provisions.

A new round of central ecological environmental protection inspectors launched 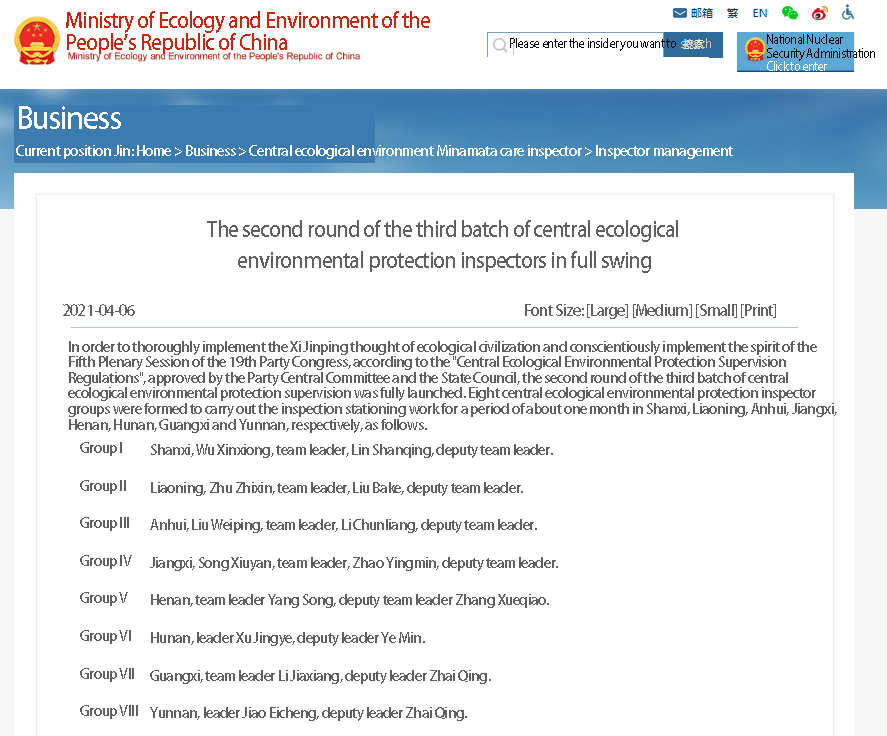 In addition, the continued tightening of national environmental protection regulations has also increased the cost of environmental violations for enterprises. For example, the newly revised Air Pollution Prevention and Control Law in 2018 raised the upper limit of fines for environmental violations, such as ordering companies that emit air pollutants in excess of standards or total targets to make corrections or restrict production or stop production and impose fines of more than 100,000 yuan and less than 1 million yuan. Companies with serious cases, reported to the approval of the people’s government with the right to approve, shall be ordered to cease operations, close.

Share:
Prev： Bathroom Tiling Has A Doorway, Learn To Save Tens Of Thousands
Next： 2 Square Meters Of Small Bathroom, But Also Can Achieve Wet And Dry Separation?